A Salute to My Dad, PFC Kermit Lyle Cave, and His Remarkable Letter About WWII

Hidden away in a security box for 70 years was a letter. It was penned by my Dad and addressed to Mrs. K. L. Cave, his "darling" wife. 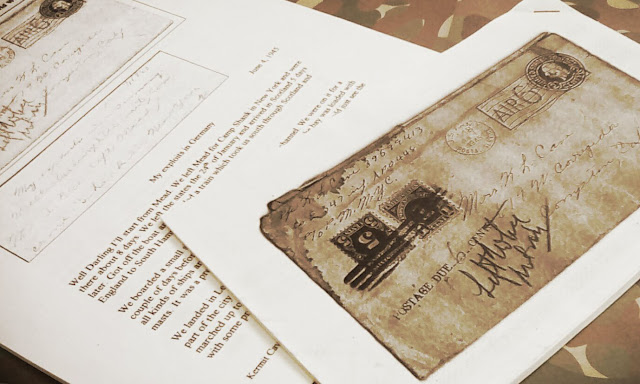 The discolored, 16-page letter is a record of his “exploits in Germany” as a Private in the U.S. Army during World War II. Written in his own long hand are the details of what he experienced on the front lines. The postmark on the envelope reads June 7, 1945. (Stamped on the envelope is a notice: “Postage Due - 6 cents,” and an indecipherable comment by a carrier. Apparently foxholes don't come equipped with postage stamps!) 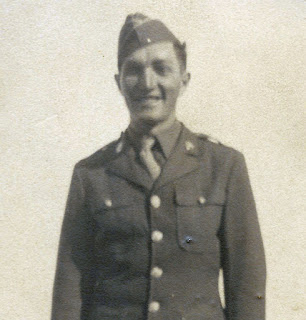 I, nor my siblings, ever knew this letter existed. It was only after my Dad’s death, as my sister helped my Mom go through their important papers that we learned of this remarkable document. Up until then, all we knew was that he had served honorably and had fought in Europe.

Why he never told us more I can only surmise. Perhaps it was too painful to revisit. He seldom talked about his stint in the military. He was a quiet man; even he would admit, “I’m not good at communication.”

Reading his letter again today makes me think differently. It’s true, he did not excel at verbal communication, but his letter reveals he could express his thoughts with pen and paper. In that way I am like my Dad—quiet and convey my ponderings best via keyboard and computer.

Which is why I opted to write this salute to my Dad and to thank him, oh so many years too late, for his bravery in fighting an enemy and writing about war at the tender age of 23.

A friend has urged me to submit my Dad’s letter to an organization which records such historical documents. I plan to do that, but for today I wanted you to see a sampling of what he wrote. I’ll start with this early entry which has him in South Hampton, England about to deport for France and beyond.

Date: Feb., 1945. “We boarded a small ship, which was to take us across the channel. We were on it for a couple of days before we sailed. On the way over (the channel), the bay was loaded with all kinds of ships and there were lots of them on the bottom. Some you could just see the masts. It was a pretty tough site.”

Date: Feb. 28th, 1945  “I went on another patrol to see if a few pillboxes in our area were occupied. The first bunch we inspected were empty but our crazy lieutenant wanted us to go on so we went. We had to cross an open field and when we did a sniper opened up on us with a rifle. I was the last man that got across. The poor guy behind me got hit in his chest so another guy and I went back for him but he was dead . . .”

Date: March 24th, 1945 “The order came down for us (the company) to move to Rhens where the battalion was to cross. We marched there and took cover in a barn until we were supposed to cross. The 1st Battalion was going across then and the Jerries were really putting up a fight. They were throwing so much lead across that you could almost walk over. . .”

Date: April, 1945 “. . . then we moved forward which put us only a few miles from the Czech border. We camped near a dam. That was where we were guarding all the prisoners. VE Day found us there. Then moved to Schoneck and from there to here. Where we’ll go from here is the big question.”

I can see why some hate it so and why they don’t want America in another one.

I can also see why war becomes necessary at times.

Regardless of your view, I hope you’ll be grateful this Veterans Day and take a moment to remember the huge sacrifice others, like my Dad, have made on your behalf.

I salute you Dad, along with your two sons, Chuck and Bobby, and others in my extended family who have served honorably in all branches of the military.

I’d make you all top-ranking generals or admirals if I could.

Julie
P.S. Was your Dad in the military? Have any letters he has penned that are keepsakes?