A bright, yellow cheese-head (Go Packers!) took center stage at Story Time this week at Community Christian Preschool. It was the perfect prop. It grabbed the attention of a group of children (mostly boys) and tied in to the subject of football, the Super Bowl, plus the book I would be reading: “Goodnight Football.” 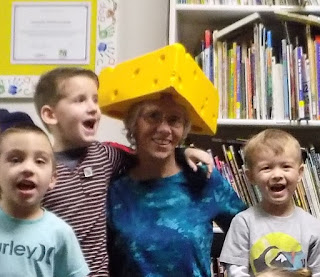 As I had hoped, the boys and girls entered the room and once spotting the big wedge of cheese started to giggle and ask questions.

“Why are you wearing cheese on your head?”

“Where did you get that?”

After quieting them down I tried to explain that the cheese-head came from Wisconsin, a state known for its cheese and football team, the Green Bay Packers, and who played in the first Super Bowl. Their blank looks let me know I was talking gibberish. Clearly, my comments were going “over their head,” as we say.

Recognizing my error, I moved on with a question which would call upon their imaginations: “If you owned a football team, what name would you give it?” Silence filled the room . . . until a brave little guy voiced a suggestion, “Seahawks.” That prompted a different child to say “Chargers.” Others followed the trend.

Not hearing an original name it was apparent my question was either poorly worded or they did not understand what I was asking. I quickly altered my game plan and brought out “Goodnight Football." Best to let it do the teaching and entertaining instead of me. It worked. Through some colorful graphics, simple text, and short story about a boy whose parents take him to a night football game, the preschoolers listened well and received an overview of the sport. Actually, the boys gained an overview. The girls soon became bored and took up day dreaming--something I expected given our topic.

Now, with only a few minutes left of Story Time I decided to try another question, but this time one I was pretty sure they could answer: “What snacks would you like at a Super Bowl game?” They were quick with their response:

“Cheese-its!” a number of them blurted out.

“Cheetos,” came from a boy off to my side.

Finally, some enthusiasm. But at the same time it was evident cheese, not sports, dominated their thoughts. Guess that's the end of Q & A’s about football. Now what? Fortunately, I had one other idea: get a picture taken of the kids with the lovely cheese-head! Oh, yeah, they liked that idea. Not camera shy, they quickly gathered around me and without any prompting, on the count of three, yelled “Cheese-head!”

Once the camera clicked a few times Story Time was officially over and the children were told to line up and head back to class. And the cheese-head and I packed up and returned home.

Later, as I reviewed the photos of the happy kids I felt better about the day, but did not dismiss the truth that I could use a class or two on child development or how to communicate to preschoolers on their level. Then it dawned on me: Like in the game of football, sometimes you win, and sometimes you lose. Besides, it's just a game and there will be more to be played. 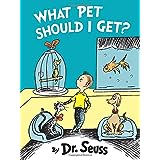 Next month for Story Time I'll be reading a silly Dr. Seuss title which is sure to be a winner. Like many schools across America, a week-long-celebration of Dr. Seuss’s birthday (March 2nd) is also planned for the preschool. For those of you unaware, this Dr. Seuss title, “What Pet Shall I Get?”, was recently discovered and published for the first time last year. The surprise ending makes this Seuss title unique.

Cheese is now dominating my thoughts, bringing to mind a book from my favorites list: “Who Moved My Cheese?” by Spencer Johnson, M.D.. Over the years I've given and recommended this title to others. The principles, told via a clever story involving two mice (Sniff and Scurry) and two people (Hem and Haw), have enabled me to embrace “change," even when it is forced upon me.

Selling millions, the book is an easy, short (less than 100 pages) and entertaining read. You won’t regret spending the hour it takes to devour its pages.

OK, enough about cheese, and books, and learning from our mistakes. Go enjoy the Super Bowl and I'll see you next week with a remarkable, true story about a little boy nicknamed "Braveheart."

Julie
P.S. Have any of you read "Who Moved My Cheese?" and consider it to be a great read too? Please let me know in the comment box below.