Vying for my attention these days are over a dozen books. Of those I have finished one I'm giving 5-stars! I guarantee you will be inspired by this amazing true story. There are also three that have made the bestseller list and while one I really liked, the other two didn't meet my expectations, but are still worth recommending.

Of the remaining three I review here, two are Christian titles getting positive reviews, one of which I felt missed the mark. The last listing, by a popular author, I wanted to finish but returned it to Audible.com due objectionable content. As for the others, they have all been started and a critique will surface when completed, but for you with inquisitive minds I'll note the titles at the end of this post.

Okay, let's start with a book I liked.

The One-in-a-Million Boy by Monica Wood. What I admire most about this current bestseller is the writing. The author has done a brilliant job weaving three stories into one with an unnamed “boy” the hero of them all.

In brief, the book revolves around a young lad who is assigned by his Scout leader to help a 104-year-old woman each Saturday at her house. As the weeks go by they form a friendship and embark in getting the woman into the Guinness Book of World Records . . . until the boy's unexpected death changes everyone and everything.

When the boy's father, who never understood his son's peculiar ways, goes to complete his son's assignment he too forms a friendship with the woman. At one point she asks him to drive her to see her son, whom she has not seen in decades, but it is a disappointing reunion. But out of the event truths are faced which lead to lessons about life, relationships and love. It is not a quick-paced story but it gains momentum with each passing chapter and finishes on a high note thanks to the "boy." 336 pages. Audio available. Warning: foul language. The Unlikely Pilgrimage of Harold Fry by Rachel Joyce. This bestseller seemed to plod along, but perhaps that was the author's intent as the story is about a man who takes a 600-mile walk in deck shoes! He makes the spur-of-the-moment decision when, after twenty years, a note arrives from his friend conveying she is near death. Though faster modes of transportation are available he embarks on the slower journey out of belief that it will forestall the death of this friend—a co-worker whom he betrayed 20 years earlier and to whom he must apologize.

The walk takes a toll on him physically and mentally, and along the way the public discovers his pilgrimage making him into a hero causing some to join and later abandon him on his trek. As he stumbles along memories from his past emerge, along with thoughts of his current unhappy marriage, the loss of his son, mistakes, and more. But by journeys end, after countless setbacks and his own mental breakdown, he arrives at a better understanding of himself, rediscovers love and purpose for life back home. 384 pages. Audio available. Warning: foul language. 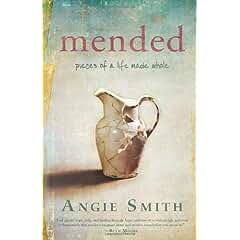 Mended: Pieces of a Life Made Whole by Angie Smith. The simple cover design is what first drew me to this book, but the story behind the repaired broken pitcher in the introduction is what convinced me to keep on reading.

Not familiar with the author I looked up her name and found she is the wife of the lead singer in the Christian music group, Selah. Aware their child died shortly after her birth I thought the book might be about how they handled such a loss. While she does touch upon that time in their life, the 31 short chapters covers other areas of her life. Overall, the book addresses how God takes our brokenness and creates it into something beautiful and useful--a bit of encouragement we all can use. At times it felt like a devotional book with the typical scripture verse at top, followed by a bit of teaching, and ending up with an action step. 224 pages. When Breath Becomes Air by Paul Kalanithi and Abraham Verghese. I fully expected to be raving about this 2016 bestseller but it came up short. Yes, it's a touching memoir about a young neurosurgeon battling terminal lung cancer and how he chose to live out his final year of life with his wife and young child . . . but it's not extraordinary.

The early part of the book is about his medical studies and life as a very driven neurosurgeon. It's not until you reach the second half does he go into detail about his treatments for cancer and how it impacted his life. What I did like about the book were his comments about how cancer disrupts your plans and makes decision making so challenging. What surprised me was when the author alludes to his Christian belief yet fails to mention the hope which comes from Christ's death and resurrection. 256 page. Audio available. War Room by Chris Fabry. While everyone else speaks so highly about this movie/book, giving it 5-stars on Amazon, I am not a huge fan, even after listening to the audio version a second time to make sure I was being fair with my evaluation. I thought perhaps I had erred when a friend stated how helpful it was. But I still hold to my perspective.

I didn't disagree with the author's effort to stress the place of prayer in our lives, or its power and what the Bible says about spiritual warfare. But I did find his story line a bit contrived and misleading as not all prayer results in restored marriages or happy endings. I only detected one place where the author specifically addressed this issue. What also kept me from being enthusiastic about the movie or book was how quickly and neatly he resolved all the major problems. 404 pages. Audio available. Bird by Bird: Some Instructions on Writing and Life by Anne Lamott. I approached this book with eager anticipation, confident I would gain some excellent advice. Had she kept her focus on writing skills, the bird-by-bird tip being a good one, I would probably be offering a positive review. Instead, I listened to a woman present what seemed like a college-classroom lecture filled with sarcasm more than wisdom. But the main reason I disliked the title was due to the conflict that arose when she declared she is a Christian and yet a few pages later she's swearing, using the name of Jesus Christ. I find that offensive and reason alone to return the item. 272 pages. Endurance: Shackelton's Incredible Voyage by Alfred Lansing. Every now and then I'll purposely select a title outside my preferred genre. This is one of them and turned out to be an amazing read. It's the true account of the captain of the British ship Endurance and its 27-man crew who, in 1914, sailed to Antarctica.

After months of battling icy seas the ship went down when it could not escape two crushing glaciers. The men survived only to spend months adrift on ice packs, eating whale blubber, dealing with frost bite from sub zero temps, overcoming hurricane force winds, etc. How they managed to fight the savage elements, maintain hope and endure makes this an unforgettable story.

Though definitely geared for a male audience or someone with a Navy background I found the lessons about leadership and perseverance within the story applicable for any age or gender. And what a treat to learn a bit of history while being entertained and inspired at the same time. If you know anyone who is facing a monumental challenge this book might provide the encouragement to press on and not give up. 357 pages.

Books Not Quite Finished

I've a number of audio books I'm working through, one of which is 54 hours long. I've given myself all summer to finish that one which is Gone With the Wind. I've seen the movie several times but have never read the book and felt it was time I did so. Other titles I'm reading are listed below:

Loved Back to Life by Sheila Walsh
The Wednesday Wars by Gary Schmidt.
Saving Sailor by Renee Riva
The Bookseller of Kabul by Asne Seierstad
The Disease Delusion by J. Bland, Ph.D.
Light in the Darkness by Lovejoy & Knopf

And waiting in the wings is bestselling author Daniel Silva's latest release, The Black Widow. I'm a fan of his espionage series and so appreciate his good writing.

Now, what have you recently read? Any deserve 5-stars? Whether they do or not I'd like to hear what title has captured your interest.