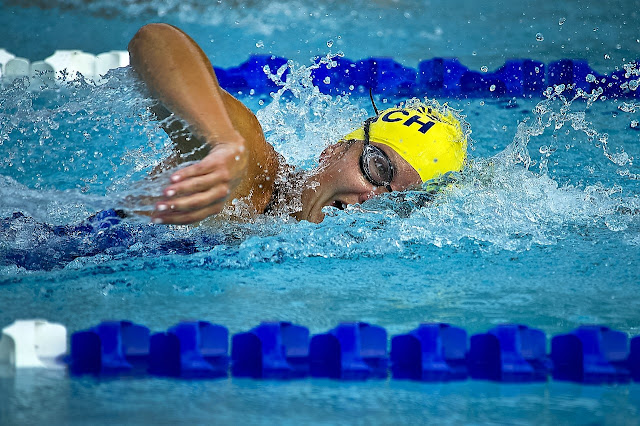 Tomorrow I reach a milestone in my life: turning 70! Birthday plans are up ahead, but for now the celebration will begin with a trip to Baskin Robbins, open a few gifts, read a chapter in a lovely new book I received, and swim laps in the pool! I have Aileen Riggen Soule to thank for that. You probably don't recognize her name, but she's known for a significant accomplishment at age 14. Can you guess what made her famous? I'll give you a hint: it has to do with the Olympics, and not the current 2016 Rio Games.

Need another hint? She won a medal.

Can't come up with an answer? Okay, I'll tell you. Aileen was the youngest female athletic in the 1920's Olympics who received a gold medal in Springboard Diving. 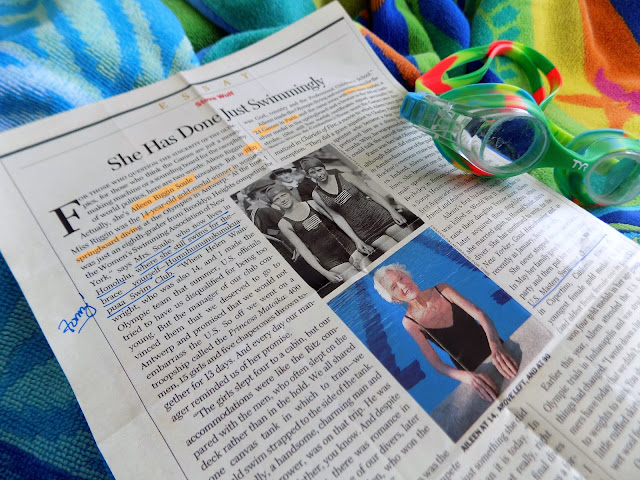 The only reason I know about Aileen is due to a 1996 Time magazine article I came across about her quest to be on the USA swim team. Unfortunately, she did not qualify due to her 4' 7” height and 65 pound weight. Instead, she represented our country at the Games in Antwerp in the springboard diving event and brought home a gold medal. Four years later she went to the Games in Paris and garnered two more medals, this time in diving and swimming.

While I enjoyed her Olympic story, what impressed me more was to learn that at age 90, Aileen was still swimming! At the time of the article she lived in Hawaii and active in the Humuhumunukunukuapuaa Swim Club. (Trust me, that is it's official name and not some typo.) and also attended the U.S. Masters Swimming Championships.

So taken by her example to stay active I saved that article knowing it would inspire me to never give up swimming, a sport I have loved since a child. Other than days when health issues interfered, or thunderclouds appeared above, I've headed to the pool each afternoon with goggles in hand to do laps. Usually a couple of noodles accompany me for water exercises or to simply relax in the refreshing waters on a hot summer day. Often my friend, Debby Alten, joins me in the pool, and frequently speeds by me in her lane with her bright yellow and blue flippers! Where's an Olympic official when you need one. 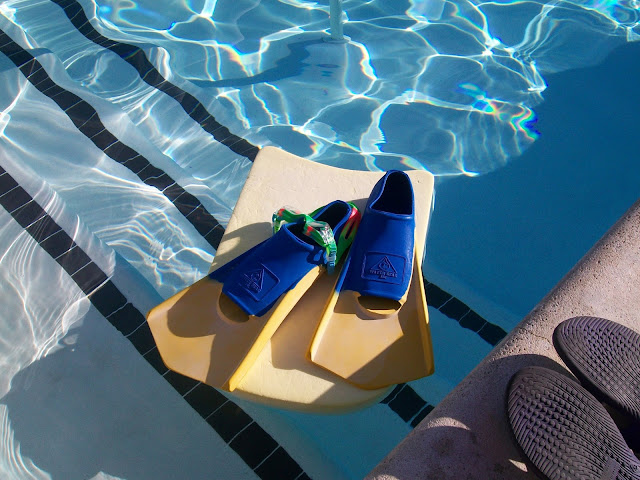 Last week the USA swim team at the Rio Games captured the world's attention, including mine. Watching world records get broken and hearing the personal stories behind many of the athletes took me back to my own days on a swim team in Vista, California. I was 12 at the time, favoring the freestyle stroke, enjoying competitions and treasuring every win. And, of course, the dream of one day participating in the Olympics was part of my mindset. But then my Dad took a job in another city, requiring a family move to a place far beyond the city limits, where no local pool or swim club existed. As a result, my days of swimming came to an abrupt halt, along with my Olympic dream.

Now, nearly 60 years later, with access to a nearby pool, I find myself swimming daily and wondering: do I have what it takes to even make it the qualifying rounds for the U.S. Masters Swim Competition? Out of curiosity I did a bit of research and discovered this year's event took place in June, but 2017's is slated to be held next April in Riverside, CA--a mere 45-minute drive from where I live. Guess that eliminates the excuse that it's too far away or too costly to attend.

Then I checked the winning freestyle swim times for my age group. Yikes, I'll need a coach for this dream to come true. (Think Michael Phelps would like the job?) It's also going to require dedication, extended practice time, and quite possibly someone with CPR training on the sidelines. Sounds daunting, but I suppose if Aileen can still compete at age 90, surely I'm not too old to try.

Believe me, if I do end up trying out you will be notified and officially invited to be a part of my cheering section. Until then, here's a video clip Debby created from one of our days at the pool last summer to keep you entertained. I'm confident Aileen would love its black/white "vintage" look and have a few suggestions on how I could improve my stroke and times.


Well, now that I've disclosed my age, a long-ago-Olympic dream and future goal ... it's now your turn. You can skip telling me your age, but if you ever aspired to go to the Olympics or had the privilege to attend the Games I'd love to hear about it in the comment box below.

As always, thank you for giving me a bit of your time and somewhere in my words was a thought worth pondering or triggered a smile.